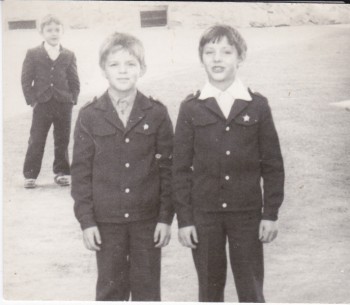 Welcome to  UkrainianArmyHelp.com. This site was created by two Ukrainians, Oleksiy Shevchukevych and Ievgen Benzar. Oleksiy is Ukrainian immigrant who moved to United States 14 years ago and Ievgen is his classmate who currently lives in Western Ukraine.

About an year ago Oleksiy with family traveled to Ukraine to visit their parents and friends. They couldn’t even imagine what their homeland would go through in a short while. The sequence of events happening in Ukraine since December 2013 reminded some blockbuster movie. First revolution on Maidan, runaway president, annexation of Crimea by Russia and then WAR came to Ukraine …

The whole world was watching in disbelieve how Russia annexed Crimea and then Russian-backed separatists occupied the part of Eastern Ukraine. The reaction was instantaneous in the form of sanctions that do hurt but don’t change anything. Ukrainian army (all naked because of prior corruption) is facing very well armed and equipped terrorists who don’t really care about ceasing the fire.

Many of Oleksiy and Ievgen friends are mobilized in Ukrainian army now. Some are in a real war risking their lives every day. Some were killed or seriously injured. Ievgen communicates with those who are at war every day and he has  learned that soldiers under the fire don’t have proper body armor or helmets. Many don’t have a proper uniform, the equipment they have is old and the cold winter season is coming…

The idea of creating such a website came after Oleksiy has shipped a military helmet from US to one of his classmates who is at war. Ievgen was able to deliver helmet directly bypassing any 3rd party organizations. The guys became confident that they can deliver help directly to soldiers who are fighting for their country. A good quality helmet or bulletproof armor is vital for protecting soldiers lives as well as other equipment that they constantly need.

All donations are processed securely via PayPal. There is no such a thing as a small donation. Either it $5 or $100, every dollar will be spent on Ukrainian soldiers needs: helmets, bulletproof body armor, medicine, uniform, gun sights, kneepads, boot or whatever else they need. Every donation that you make will be reflected in the News section. We would like to be as much transparent as possible.

Thank you for checking this website. And thank you from all Ukrainian people to those who made the donations!